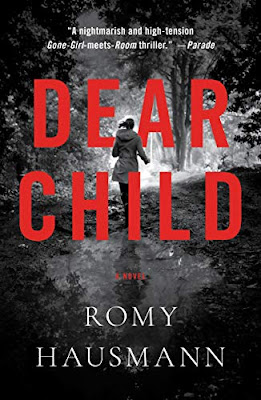 He leaned so forward that the tips of our noses almost touched; his weight was painful on my torso that had suffered his kicks and punches.

“ ‘You are home, Lena,’” he whispered back, brushing my forehead with his lips.

I turned my head away and buried my face in the cushion of the back rest …He thrust his hand roughly between the cushion and my cheek, and turned my face back, forcing me to look him in the eye.

“ ‘Do yourself a favor and think about this carefully, Lena. Ask yourself if I’m joking. If I’m just trying to frighten you. Or whether I’d be capable of killing you.’”

4,993 days. That's how long Lena Beck has been missing when Matthias Beck, her father, gets a call in the middle of the night saying she has been found. Matthias and Karin, Lena's mother, have lived the last thirteen years not knowing whether their daughter was dead or alive. The last thing twenty-three-year-old Lena had said to her father was, "Ciao, Paps. See you soon." Now they’ve received the call they have long awaited. Lena is alive. She’s being treated at a hospital two and a half hours away from Munich, in Cham because she has suffered injuries after being hit by a car, but she’s alive. And, Lena's thirteen-year-old daughter Hannah is also there. Matthias and Karin rush to get dressed and go to Cham, to reclaim the daughter who has been gone for so long.

Matthias is allowed into the hospital room to identify Lena, but he comes out swearing that it is not his daughter Lena. After leaving the hospital room and standing in the hall with his wife Karin and the police officers, Karin points and cries out “Lena.” Down the hallway is Hannah with Sister Ruth coming to visit Hannah’s mother. Hannah is the spitting image of Lena, and there is no doubt in Matthias’ mind that Hannah is his granddaughter. Sister Ruth, though, whisks Hannah away before the Becks can approach them, as she wants to remove Hannah from the commotion. Matthias and Karin will soon learn that there is a grandson, too, but Jonathan will be unable to communicate with anyone, while Hannah seems quite open to talking to her grandfather.

“Lena” wakes up in a hospital bed with two policemen waiting to talk to her and confirm her identity. When asked her name, she says her name is Lena. When they ask for a surname, she has nothing for them. Meanwhile, thirteen-year-old Hannah is being questioned by Sister Ruth, a kindly hospital employee, who is trying to ascertain where her father is and how to contact him. Hannah is unable to help, as she knows her father is unavailable. “Lena” remembers hitting her husband over the head with a snow globe, getting the keys from his pocket as he lay unconscious on the floor, and fleeing the cabin after telling the children to follow her. She remembers running through the woods to a road where she knows she was hit by a car. It’s rather vague after that, but she realizes that Hannah was with her in the ambulance. “Lena” tells this to the police, who seem sympathetic at first, but when Cham policeman receives a call that the cabin and man have been found, the demeanor towards “Lena” changes some. They inform her that the man lying on the floor of the cabin had been hit so hard and so many times that his face was obliterated. They would have to do a forensic sketch-up of the victim. “Lena” says she thought she only hit him one time, but that it’s possible she doesn’t remember it clearly. Then she tells them about her imprisoned life and her desperate escape.

Hannah has told Sister Ruth that she and her brother live with their mother and father in a cabin in the middle of the woods and describes the surroundings well. That aids in the police finding the cabin. Hannah also relates to Sister Ruth that it has all the windows sealed tightly and a recirculation unit that gives them their air to breathe. Ruth is horrified by this news, but Hannah sees nothing extraordinary about it. It is her home and her “normal,” all she’s ever known. When she further tells Ruth that she has a younger brother who is eleven, but that he was left back at the cabin to clean up all the stains/blood from the carpet, Sister Ruth realizes just how twisted Hannah’s childhood has been. When authorities finally find the cabin on the German-Czech border, they find a dead man with his face bashed in and the boy named Jonathan. Jonathan is taken to the same hospital as Hannah and “Lena,” but he is kept separate at first from Hannah. He won’t talk and seems withdrawn into himself. Both children are kept in the hospital under the care of pediatric psychiatrist Dr. Hamstedt.

“Lena” is finally able to tell the authorities that her real name is Jasmine. The man who abducted her made her answer to Lena and nothing else. She tried to tell the man her name wasn’t Lena at the beginning of her fourth months with him, but she was beaten badly for it. “…I still had no idea what he meant by ‘rules,’ but I had understood one of them. I had to be (Lena), or I would be dead.” The rest of the rules would soon be learned quickly, such as the four times to use the bathroom were seven in the morning, twelve-thirty, five in the afternoon, and eight at night.

The format of the story lends to an easy, continuous read. Three main narrators carry the tale. Lena/Jasmine, Hannah, and Matthias. Jasmine and Hannah tell their perspective views of being in the cabin, a tightly regimented existence that brooked no deviation or surprises. Of course, the children were well conditioned into the life they were living and didn’t ever question the rules. Jasmine quickly learned not to. There’s a lot of going back and forth from the present to the past, as the memories of living in the cabin are given voice by both Jasmine and Hannah, but I was never confused as to when something told had happened. The reader really gets to know these three characters through their narration, with Jasmine being the most reliable character and the most likeable. It is through Jasmine’s narration that readers learn the true horror of her captivity. Hannah’s years of conditioning coupled with her life entirely indoors have resulted in a strange mixture of intellectual precociousness and a stunted physical growth that makes her appear much younger than thirteen. Hannah speaks in facts, sometimes robotically about things because she is unable to engage socially in conversation. Matthias gives readers the perspective of his daughter’s disappearance fourteen years ago and his frustration and anger at the lack of success in the investigation to find her. He is a volatile, brash character whom the reader will strive to feel sorry for but find his bully behavior a problem. Matthias has lots of blind spots in his focus to find where his daughter Lena is.

This book, this story is dark, suspenseful, chilling, twisted, gripping, disturbing, and unputdownable. A stranger abduction story is always a terrifying tale, and Dear Child by Romy Hausmann is indeed that. There is no build-up to the terror. The reader is dropped right into the middle of it, gasping from page one at the cruelty of the kidnapper and the fear of the kidnapped. As the story unfolds from the three narrators, you see the twisted, ugly side to love. The middle of the story into which the reader is dropped is far from the end; the escape is far from complete.