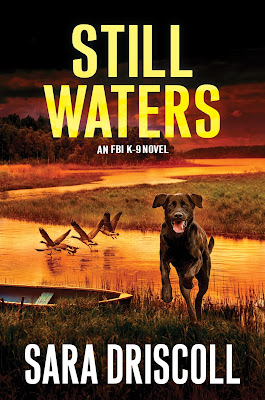 Every time I read a book in Sara Driscoll’s F.B.I. K-9 series I fall completely into the world of its story.  I am all in, trying to keep pace in a high action story where danger is never far away.  The combination of human handlers and their canine partners is thrilling to see, or read about, in how it works.  The trust between them is essential, and it pays off in saving lives.  Meg Jennings and her Labrador, Hawk, are part of the FBI’s Human Scent and Evidence Team out of Washington, D.C.  Meg and Hawk partner up with Brian Foster and his canine, Lacey, in search and rescue efforts.  They are called in to find survivors in large- and small-scale cases.  Hawk and Lacey are not cadaver dogs, those that search for the dead, but it can turn out that a search and rescue ends up in a body recovery status.  Time is always a crucial element in the team’s work, and in reading this series, you feel the urgency of the searches.

Still Waters takes Meg and Hawk and Brian and Lacey to the wild terrain of the Boundary Waters National Forest  in Minnesota, more specifically to the waters of Lake Superior which are part of the area.  Always wanting their dogs to be at the top of their game, Meg and Brian have signed up for a water skills training competition.  While Hawk and Lacy are both unbeatable in their land skills, the water training is new, as is the searching for something dead.  The training is the most important aspect of the weekend, but the two handlers also would love for their K-9 partners to excel in the competition part.

Along for the trip is Todd Webb, Meg’s paramedic/firefighter boyfriend, and his two firefighter brothers.  Also accompanying the group for their big camp-out is Ryan, Brian’s husband.  Todd has assured Meg that she will love the camping experience, with meals prepared by him and his brothers and an air mattress that she can get a great night’s rest on.  It seems like the setup for a perfect weekend of spending time with her amazing K-9 partner and a group of great friends.  Well, maybe not so perfect.

Both Meg, with Hawk, and Brian, with Lacey, have top results in the first day’s training, with the dogs being able to locate cadaver tissue in tubes down in the water while in a boat.  However, when it comes time for the land to water trials, the competition part, Hawk seems to get confused at one point on the trail, which is completely unlike him.  Lacey leads Brian to what he thinks is the top time, but when times are announced, another handler is named in first place.  Brian is sure he timed himself correctly, but the judge of the competition rules against him.  Something seems off in this competition right awy.  The winner of the first day’s trail is Rita Pratt from the Laramie Sheriff’s Department in Wyoming.  She is an arrogant, hostile person, unlike other handlers Meg has met.  Meg has to step in when Pratt is berating another handler to keep the dogs from becoming agitated.  Meg’s interference is not appreciated.  Meg has another encounter with Pratt that evening, which will have serious consequences for Meg, maybe even causing Hawk to be taken away from her.

Pratt is discovered dead the next day when during the training session, Hawk sniffs out human remains in the water, after already finding the cadaver tissue hidden by the training crew.  The F.B.I. agent who arrives to investigate the suspicious death focuses on Meg as the lead suspect, after hearing about her dust-ups with Pratt and that Meg’s dog found the body in a complex search area.  It becomes apparent that Meg is going to need help beyond her supporters already there.  A call to Clay McCord, her sister Cara’s boyfriend, who is an investigative reporter for the Washington Post and a call to her supervisor, Craig Beaumont assures that she will have the best people working on proving her innocence, as both men head to Meg's training location.  There have been strange reactions from people concerning Pratt all weekend, but, unfortunately, Meg’s interactions are the ones most visible.  The time is short and the facts are slippery in trying to ensure Meg doesn’t lose her freedom and her dog.  And, Pratt’s death won’t be the only murder that weekend.

Still Waters incorporates all the successful elements of the past six books in this FBI K-9 series.  The high energy of the humans and dogs working together in a clock-driven suspense plot.  The bonds between humans and dogs and between humans and humans that mean the difference between life and death.  The sense of community in the world of Meg Jennings, including her co-workers, her boyfriend, her family, and her friends.  The settings which are different in each story, and in this story are a fascinating character on their own.  The information woven throughout the story about how search-and-rescue dogs and their owners work.  The story that always deals with something new, something you probably haven’t read about before.  Writing that flows smoothly and puts the reader in the setting, in the situation, and in the lives of the characters.  All these elements combine for a story not to be missed.  Still Waters is one of my favorite reads this year in one of my favorite series every year.

Full Disclosure.  I received an advanced copy of Still Waters from the author for review.  I enjoyed it so much, I plan on buying a hard copy, too.