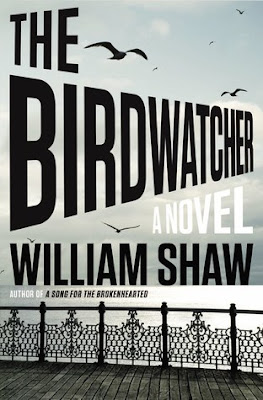 I have a fondness for mystery/crime set in isolated settings, so The Birdwatcher, set in the harsh, bleak landscape of the Kent coast and with backstory integrated from the segregated factions of Northern Ireland in the late 70s, The Birdwatcher solidly checks that box.  Setting is a major player in this standalone by Shaw, with it influencing the action in dark, reclusive ways.   And, the setting, with its solitary and inaccessible features is reflective of the characters that Shaw so deftly draws, their secrets and their fears keeping them apart from the warmth of companionship.  Rather like a locked-room mystery in which one must determine how the players all there in front of us were able to elude our grasp of the guilty.  And, like a locked-room tale, this novel is not a thunderous roar of action, but instead is a slow, meticulous sifting of the evidence and connections to a crime.  The story is a police procedural with a dogged determination by the main character to get it right, and that takes a bit of time.


Sergeant William South has worked as a policeman on the Kent coastal lands and the Dungeness area for over twenty years.  He is quite content to work as a routine policeman in the community and has no experience with murder cases.  That dearth of experience is self-imposed, as he early on decided that his past as a murderer should preclude any involvement with it in his job.  He is an avid birdwatcher, having started the practice as a boy, and it is this activity and work that comprise his life, nothing more.  His contentment, however, takes a hard hit when a new detective sergeant, DS Alex Cupidi, shows up, and due to the force being short staffed, William is assigned to help her get her bearings.  Unfortunately, that help includes accompanying DS Cupidi on her way to a murder scene.  That murder scene turns out to be William’s neighbor and only quasi friend, Bob Raymer, who was a fellow birder.


The brutality of the murder is shocking to all, and there are no obvious suspects.  Like William and others that lived in that remote region, Bob Raymer kept himself to himself.  William realizes just how little he knows about the man who lived only a hundred yards away from him.  Although William’s official involvement in the murder case of his friend wanes after the discovery of the body and subsequent interviews, his personal interest doesn’t.  It has stirred old memories of another murder, and the book begins its backstory of William as a thirteen-year-old in Northern Ireland during the ethno-nationalist conflict called “The Troubles.”   It was another harsh setting with a grim story of his home life, where his father was a violent, angry man and his mother one of the two victims of the father’s abuse.  Developments in the present-day case serve as an impetus for William to come to terms with the murder he committed as a youth and to ensure that justice is served in his friend’s death.  A physical connection of the past crime to the present one cannot be ignored by William.  Shaw does an exceptional job of transitioning from the dangerous conflict of Ireland past to the desolate present of the coast of Kent, and we, along with William, see an unfolding of the conflict and pain inside him.


William’s character is a study in how one’s past affects one’s future, and raises the question of how a life burdened with secrets can sustain itself without facing those secrets and demons.  The author has given us a character that is a complexity of interesting, peaceful, closed-off, and amiable.  That William accepts a forced friendship (from a plea of Alex Cupidi) of Cupidi’s daughter Zoe, who is also interested in birding, and that he seems to care about Cupidi’s and Zoe’s lives reveal a glimmer of hope for his bonding with other people.  Shaw doesn’t shy away from dealing with how people and relationships can be the biggest mysteries of all.


The Birdwatcher is the first novel that I’ve read by William Shaw, and I will be going back to check out his Breen and Tozer series.  Fans of Peter May should be especially drawn to The Birdwatcher, as May has mastered the setting of isolation long ago, and Shaw does a superb job here.
Posted by Kathy Reel at 10:09 PM