Today on the Reading Room blog we have guest blogger Aubrey Hamilton sharing her Golden Age mystery knowledge about one of that period's authors, Patricia Wentworth.  I am starting to explore this period more myself, so I'm delighted that Aubrey agreed to write a piece on one of the authors about whom I'm curious.  Pay close attention to the books Aubrey suggests in the Miss Silver mysteries, as she has warned me repeatedly not to start with the first one in it, and she knows of what she speaks.  The Case of William Smith is just $1.99 on Kindle.

Dora Amy Elles (1877---1961), who wrote as Patricia Wentworth, was born in India during the British Raj and was educated in England. She began publishing in 1910 and steadily produced novels, mysteries, and poems, more than 60 volumes, until the end of her life. See more biographical detail and a bibliography here: https://en.wikipedia.org/wiki/Patricia_Wentworth

She’s mostly known for 32 Miss Silver mysteries. Miss Maud Silver is a former governess turned private investigator. I have not discovered exactly how that transformation took place. She consults with the upper class of English society. Each happy client refers friends and relatives to her and she has no need to advertise. She is often compared to Miss Marple, with good reason. However, Miss Silver always knew she would have to earn a living, unlike Miss Marple, and she is well aware of her value. She is accepted and consulted by Scotland Yard, most notably Frank Abbott, who rises through the ranks during the series, one of the few changes over the course of the stories. His relationship with Miss Silver mirrors Miss Marple’s relationship with Dermot Craddock of Scotland Yard.

The first book in the series Grey Mask (1928) is considered by most of her fans to be the worst. Ten years later Wentworth brought Miss Silver to life again in The Case Is Closed (1937) and thereafter she made nearly annual appearances for another 25 years. The bulk of the series, 26 books, was produced between 1940 and 1955 and consequently deals with the war and its impact on everyday life. Not surprisingly, people who are thought to be dead but come back home after all are a recurring theme in Wentworth’s plots. It crops up more than once in the Miss Silver stories, although not as often as amnesia does. I count at least five Miss Silver books in which amnesia is a central plot point. Two of those books include a main character thought to be dead but is found living with amnesia, an occurrence not unheard in the aftermath of the bombings in England.

A romance is an essential element of each story. Like Ellis Peters and the Brother Cadfael mysteries, Wentworth couldn’t seem to write a book without a young couple whose romance depends on the discovery of the culprit. These characters in her early books often crop up in the later ones, as they send their friends to Miss Silver for assistance.

Miss Silver did not marry but she has nieces that serve in lieu of daughters. She is much taken up with their lives, not the least of which is her knitting for them. She is always knitting something. Baby blankets, sweaters, socks, it never stops. In a recent discussion on the Facebook Golden Age Detection page, someone mentioned her plan to create a table of Miss Silver titles and add the item being constructed by Miss Silver during the investigation as well as its color and its prospective owner.

Unlike contemporary mystery series, there is no character development in the Miss Silver books. Miss Silver looks and acts pretty much the same throughout all 26 books. This means the books can largely be treated as stand-alone and series order is irrelevant. Good titles for new readers to start with include The Chinese Shawl (1943), The Case of William Smith (1948), and Poison in the Pen (1955). I think that perhaps Miss Silver Deals with Death (1943) may be my favorite. See my reviews here for more information on other titles for consideration.

Aubrey Hamilton's Review of Out of the Past by Patricia Wentworth

Aubrey Hamilton's Review of She Came Back by Patricia Wentworth

Aubrey Hamilton's Review of Through the Wall by Patricia Wentworth

Hard copies can be difficult or expensive to locate. Electronic versions for Kindle are often on sale for $1.99 on Amazon. 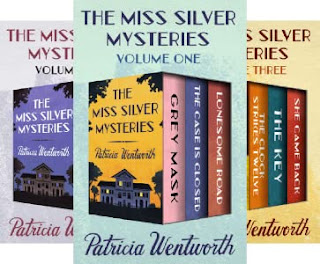 Don't forget to visit Aubrey's blog, "Happiness is a Book," where she regularly reviews Golden Age mysteries and provides fascinating information about that period and its authors.  https://happinessisabook.com/