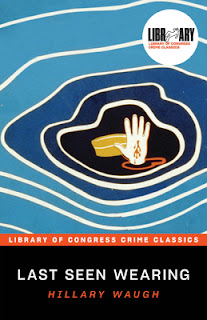 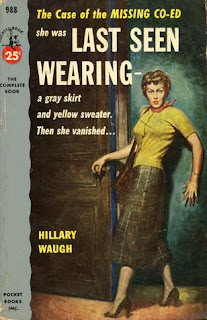 “That’s what the police business is all about.  A lot of leg work, a lot of disappointments, and a lot of waiting.”

During the last year I’ve become interested in classic mystery/crime books, including the Golden Age of Mystery and other classics into the 50s and 60s.  And, I’m not alone in this interest, as the last decade has seen a huge increase or renewal in reading and discussing classic crime books.  There are some great publishing  sources for reading the best of American and British classics.  For America authors there is The Library of Congress Crime Classics, bringing back to print works from the 1860s to the 1960s, and  Penzler Publishing's American Mystery Classics.  For British classic authors, there is British Library Crime Classics, which include many short story collections (and many of those are edited by my friend and classics expert Martin Edwards).  I’m making a bit of a research project in approaching what I want to read in these revived stories, looking for books and authors associated with impacting the world of crime fiction in ways that intrigue me.  Of course, my love of mystery/crime reading has its roots in the Golden Age's Queen of Mystery, Dame Agatha Christie, and I have been lately adding more and more of the British Library Crime Classics short story collections and the reissued LOC classics and Penzler classics.  And, let me add that the covers for all of the reissued publications are why I buy the print copies.  I have started my renewed reading in earnest with an American author and book entitled Last Seen Wearing by Hillary Waugh, a novel credited with being the first critically acclaimed and successful in the sub-genre of police procedurals.

What the reader gets is just that, a murder case which is step by step what the police are doing to solve it. The focus is the police work.  The police themselves, including the police chief in charge, are only developed as characters as far as what their police work shows about them. They aren’t portrayed as especially brilliant or intuitive, just as regular people doing their best in an often difficult job. Chief Frank Ford is gruff and not emotional, but he’s indefatigable in his pursuit of the guilty. Detective Sergeant Burton Cameron has a college education and an extended vocabulary, which he likes to use to annoy the Chief. Home life and life outside that of police work is left unexplored. The reader only learns that Chief Ford’s wife is most considerate of his being on a case and has food waiting for him when he arrives home, and the chief has a teenage daughter. Those relationships are not examined. The only character sketches being developed are pictures of who the victim was and who fits the profile of the murderer.

The story is straight forward, no complex layers of past history and subterfuge. Of course, there are secrets uncovered about the victim and the murderer, as those come with unraveling how two people come together, and one ends up dead. Hillary Waugh was influenced by the radio show Dragnet in which the focus is on “just the facts.” Chief Ford and his men (again, it’s 1950, explaining the absence of women) doggedly pursue the evidence to assure justice.  The social mores of the time period are ever present in the uncovering of evidence.

The narrative opens on March 3rd,1950, and Lowell Mitchell is a freshman student at Parker College for Women in Bristol, Massachusetts. By nighttime, her roommate and friends realize that the last time anyone has seen her was at noon on that day. The housemother of the dorm complex and the warden of the school are  notified in the wee hours of the morning on the 4th, and it’s determined that Lowell didn’t check out to leave the campus.  Wanting to avoid any scandal or publicity, Ms. Kendall, the warden, waits until the afternoon to notify the police.

Chief Frank Ford is called in to find the girl, who appears to have vanished into thin air. But, with the first interview of those who were in Lowell's dorm on the night she goes missing, the story becomes one of what Chief Ford does to conduct first a missing person’s investigation and then, a murder investigation. The amount of legwork to find a missing person when that person’s destination is unknown is enormous, and being the time setting is 1950, this is police work at its most basic, including written records and reports, chasing down leads in person, interviewing countless people on campus and some off-campus, and searching for evidence to find this young woman. No cell phones, no computers, no tracking devices to help. The reader is not privy to any side bars of information from characters or flashbacks. What the reader learns is what Chief Ford learns, and it's learned when he learns it.  It's an interesting process to watch unfold, and I won't spoil it by recounting it here.

One of the challenges for me in reading this early police procedural or many of the classics is the lack of character development. I’m usually a reader and reviewer who is passionate about characters, their many layers and continuing development, especially when in a series. However, the early police procedural isn’t about character development.  It’s about the story, the resolution of the crime.  I’ve already mentioned that Chief Ford is a blank where his past is concerned, or his present is probed. No psychological study or explanations offered here for a character’s behavior, other than what the victim’s thinking behind her actions and what motivated the murderer. So, it’s with great surprise that I found myself thoroughly engaged in this book, avidly following the investigation along with the police. There were never any tricks or smoke and mirrors to divert the reader’s attention from the facts. I must admit that I felt I knew who the guilty party was early on, but that didn’t interfere with my enjoyment of watching the investigation unfold. I wanted the guilty caught, and I was cheering the police on to uncover the evidence leading to resolution.

One of the great assets to this book being a part of the Library of Congress Crime Classics series is that it contains an introduction by a contemporary writer or scholar. Last Seen Wearing is indeed fortunate to have Leslie Klinger as the author/scholar setting the stage for this book and author. Please don’t skip the introduction. It’s brilliant. And, another fascinating addition are the footnotes throughout the book defining a word, identifying a location, or clarifying allusions. There aren't so many footnotes as to be distracting, just enough to be helpful, and the convenience of having them at the bottom of the page was well thought out.


I enthusiastically recommend Last Seen Wearing. It is Hillary Waugh’s only novel featuring Chief Ford, but it’s only the beginning of his police procedurals. I will be reading more of those. Just when I think I've got my reading tastes all figured out, something comes along to surprise me, and I wouldn't have it any other way.