The Madness of Crowds by Louise Penny: Reading Room Review 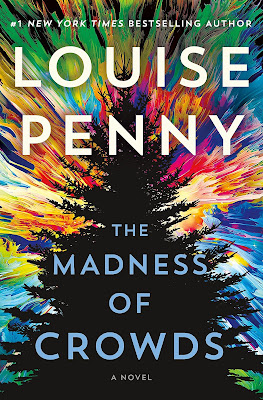 I was glad to learn that the new Armand Gamache book would take place post pandemic, as I thought that the story might be gentler on me and less stressful than one set during the pandemic. However, as I started reading, I quickly realized that a new threat of contagion is featured in The Madness of Crowds. This would be a challenging read, one of good versus evil, humanity versus survival of the fittest, with the direst consequences. I wasn’t sure I was up to the read, the battle which Armand would surely have to wage, and, the book is 436 pages, so it would be a long battle. Was I too weary of world dooming struggles? Of course, the deciding factor was that this was a favorite series by one of the most amazingly talented authors I’ve read. In the end, I trusted Louise Penny, that she would not only give me a read I could handle, but one which I could embrace with heart and soul. Few authors touch readers’ emotions like Louise. Well, I couldn’t put this book down and read straight through the weekend. The writing is so damn good, the story is so compelling, and the characters are completely captivating.

The Madness of Crowds opens when the pandemic has been over for some months and people are gathering again. In our beloved Three Pines it is the week between Christmas and New Year’s, and all our favorite characters are convened, even Armand’s children and grandchildren. Myrna has her bookstore open, Gabri and Olivier are serving hot chocolate and scotch at the Bistro, Monsieur Beliveau’s General Store is providing necessities, and bakery goods once more tempt the villagers at Sarah’s boulangerie. The Christmas trees and lights are still up, and even the notable three pines in the square are festive with lights.

But, Gamache must leave the holiday atmosphere when he receives a call from the Chief Superintendent of the Surete du Quebec who has assigned Gamache and his homicide department a security detail only three kilometers from Three Pines. It is for a lecture given by a statistician at what is now an old gym at the Universite de l’Estrie. Gamache is dumbfounded that the Chief of Homicide and his team are being asked to handle a security task. However, when Gamache reads up on Professor Abigail Robinson, the lecturing statistician, he realizes why the event requires the utmost concern. Abigail Robinson is using the pandemic deaths to instill a new fear and unthinkable agenda to the Canadian people and beyond. Robinson’s proposals are shocking, but there are many listening to her ideas and agreeing.

Despite the wintry conditions, the old gymnasium fills to capacity. Although Armand and Jean-Guy have a personal reason to especially abhor the immoral message of Abigail Robinson, her life has been threatened, and they must honor their jobs to protect her. There is indeed an attempt made on Professor Robinson’s life at the lecture, but what terrifies Gamache is that the videos of Robinson pale in comparison to a live visual of her unnerving control over a crowd.

Murder does soon find its way to the Abigail Robinson campaign of horror, and it lands smack dab in the middle of Three Pines at the Auberge’s New Year’s Eve party. Robinson is still visiting and attends the party as the guest of the university’s chancellor. With the distractions of fireworks and a New Year’s Eve countdown on the television, a life is taken, and someone doesn’t quite make it to the stroke of midnight. There are multiple suspects who turn out to have opportunity and motive, but it will require a pertinacious effort from Gamache and his two most trusted and tried agents before the why will out the who.

One of the thrills of this series for me is how Armand and Jean-Guy and Isabelle dig so deep into the lives of those involved in the crime, caring very much about that why, as well as the who. They know that murder often has a long reach to the past, and this murder seems especially so inclined. The psychological analysis that goes with the investigation, of both victim and suspects, is fascinating. Gamache talks about pulling at different threads to uncover the secrets and clues that lie at their ends and putting the pieces of a jigsaw puzzle together until the last piece makes sense of it all. As Gamache looks at all the different threads and pieces of an investigation and suspects, readers will find themselves examining their own reactions and thoughts. Penny cleverly gets the reader to dig down deep, too.

Meanwhile, Reine-Marie has taken on a job of helping to sort through papers of a recently deceased elderly woman who lived nearby. The daughter of the deceased thought that Reine-Marie’s archival skills would help distinguish any important papers from those which could be discarded. Reine-Marie is bewildered at finding pictures of monkeys drawn on letters and documents, and monkey trinkets, too. It’s an inexplicable, unusual pattern, and there’s an interesting story of the 100 Monkey Theory that comes up, but the connection to the rest of the storyline doesn’t seem to be there, until it is. The horror revealed is based on a true story.

Fans of this series know that the characters are second to none in their development and reader investment. Is there any character (or characters) more loved than the poet Ruth Zardo and her duck Rosa. The whole Three Pines community is an extended family, and we cheer them on with their accomplishments and mourn with them in their sorrows. In this book we get to see Jean-Guy as the amazing father he is becoming and Clara developing a sense of humor and ease with her artwork. Following Gamache and Jean-Guy and Isabelle in their thinking through the case is like watching another kind of art. With our Surete crew, we are privy to so much meaning behind actions and hidden connections. I become mesmerized by the intricacies of their investigations.

And, the new characters for each book are deeply layered, too. One of the intriguing characters added for this story is Haniya Daoud. Haniya is a young woman in her early twenties who suffered kidnapping, torture, and rape as a young girl in Africa’s Sudan. Escaping and freeing her fellow captives earned her the name Hero of the Sudan. She’s a contender for the Nobel Peace Prize. Why is she in Three Pines? What exactly should the demeanor of a “saint” be? Oh, Louise Penny does make a reader think.

The time setting of after the pandemic for The Madness of Crowds proves an important one. With all the crack-pot theories and misinformation slung about during the pandemic and even before, it’s easy to hope that the end of the pandemic will reset the world to a better state. But, we see in this story that people are desperate for assurances that it can’t happen again, that they can be kept safe. They want someone to tell them how to avoid the dangers of another plague, where hospitals are overrun and have no beds left. So, someone, in this instance Abigail Robinson, comes along and offers people a plan to protect themselves. The cost is their humanity, but many are willing to pay that price. I can’t deny that I was distressed by the plan and its growing acceptance, as the disregard for others has been prevalent in the pandemic we’ve experienced in real life. Plausibility is all too close to the surface.

The Madness of Crowds is the 17th Inspector Gamache book, and it’s clear that Louise Penny is not losing any steam in the writing of this series. I have enjoyed every book and found each one to have its own compelling personality. Louise Penny doesn’t shy away from the darkness or hard realities, but she reminds us that the broken places are where the light gets in. There are so many insightful quotations throughout Penny’s books, and I found them giving me hope with their counters to despair. The snippets of poetry from Ruth Zardo’s poems are pause points for me to feel a depth of connection to the world. The Madness of Crowds encapsulates all the best that is Louise Penny’s writing, and I enthusiastically recommend it.

I’m grateful to Minotaur Publishing for an advanced copy of The Madness of Crowds, and I have given an honest review here of its reading.