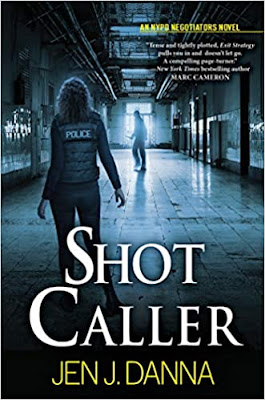 Jen Danna has been an author whose plots have intrigued me for the last decade, beginning with her co-authoring series, the Abbott and Lowell Forensic Mysteries and, more recently, the FBI K-9 Mysteries. Last year she began her solo series the NYPD Negotiators, and Shot Caller is the second book in this exciting new line of stories. Again, this series carries on the excellent plotting of her past writing. The stories begin with an engaging premise that focuses on resolution, no wandering loose canons but a clear path of action and intent.

When talking about police procedural stories, readers generally are referring to following an investigation from the criminal act or discovery of a body to gathering evidence and finding the perpetrator(s) of the crime. With the NYPD Negotiator series, we start with a guilty party and watch as the police negotiators try to defuse a dangerous situation to prevent more damage or more loss of life. The negotiator police procedural could be called a sub-genre of a sub-genre. Whatever it’s called, it is as fascinating as any investigation is. The tension and suspense are constant, as lives hang in the balance of a negotiator being able to reason with the unreasonable.

The situation Gemma Capella faces in Shot Caller is a prison riot at Rikers, the prison that sits on Rikers’ Island in the NYPD jurisdiction. Rikers is a hotbed of rival gang members and the dregs of society, sprinkled with unfortunate others who find themselves incarcerated with the hard-core criminals. The conditions are nightmarish. One area of the prison is named the Enhanced Supervision Housing Unit, created to improve on the solitary confinement situations. In the ESH inmates spend a minimum of seven hours outside their cells and have access to mental health and social programs, much different than the former 23 hours in the cell and one hour out of previous solitary confinement conditions. However, the units had not been as successful as the DOC, Department of Corrections, had hoped. It is this unit where a prisoner is able to get loose from his shackles, instigate a fight, and lead the prisoners in overcoming the guards and taking over the cell block.

More usually a negotiation involves one person with whom the negotiating team must establish contact and try to convince the hostage taker or perp into a give and take relationship, with the goal being the person ultimately giving himself up and any hostages freed. This time Gemma and her team are faced with a cell unit full of 42 prisoners and eight prison guard hostages. Whereas there might be hope of one negotiating team handling and resolving a situation in a day’s time in a normal stand-off, there’s little hope a prison situation will resolve itself in a day or even two. Gemma’s boss, Lieutenant Garcia forms two teams, with Gemma as the lead negotiator on one, the one operating from 8 a.m. until 8 p.m.

Not all negotiations are successful, and so there is an Apprehension Tactical Team, the A Team, always ready to go in with force and end the situation. They are highly skilled and competent at their job, but too often there is loss of life when they must go in. The negotiators want to avoid the A Team solution, and work hard to do so, but it is the tactical team’s leader that has the final say in when their actions are necessary. Gemma has a good working relationship with the tactical team, and she expects to be given every chance possible to pull the conflict out of the fire.

With the initial take-over of the cell block, there is, of course, violence. It’s not known initially if any of the prison guards or prisoners are dead or injured badly. There’s plenty of bad blood in the mix. Different gangs who hate each other and, most dangerous, all the prisoners hating the guards. A powder keg waiting to ignite is not an exaggeration. The first order of business for the negotiators, after getting set up, is to contact someone inside, but even that has to wait for a cooling down period this time. When Gemma starts trying to open communications, it takes a while, and she fears that there is only chaos and no one in charge.

The prisoner who finally answers Gemma’s call is Rivas, a member of the Filero Kings gang. Kill Switch, his gang name, gains control of the unit, and focuses on Gemma as the negotiator with whom he’ll communicate. Thus, Rivas becomes the “shot caller,” and just like it sounds, he will be the one to either work with Gemma or call off negotiations. It takes all the years of experience Gemma has accumulated to handle the volatile scene, where a misstep on her part can mean someone dies. At first there are some steps forward, and Gemma gets Rivas to submit a list of demands, always an important step in negotiations. But, unpredictability is always just around the corner, and in a negotiation with rival gang members in the mix, the chances for disaster are high. At a moment of crisis, will cooler heads prevail, or will force be the only viable answer? Readers will find it hard to predict the outcome.

Besides plot and pacing, Jen Danna has a deft hand at character development. Each book is revealing more about the Capella family, a strong, closely knit group who have each other’s backs. Of course, it helps that they are all deeply entrenched in the NYPD, with Gemma’s father being the current Chief of Special Operations for the NYPD, her brother Alex being in Internal Affairs, and brother Joe being a captain with the NYPD Gang Unit. Joe is able to give some insight into the gang members holed up in the cell unit. Readers will be drawn to this family who has suffered a tragedy early in Gemma’s life and who followed in the father’s footsteps of service. I look forward to getting to know them more and more.

Jen Danna is what I call a solid writer, one who has control over her story and gives readers a tightly woven plot where characters do their jobs without hysterics or psychological stumbling blocks. I’m not saying that there aren’t some background issues hanging around, and I’m not precluding the possibility for surprises; I’m just saying the focus of the story is maintained, which is the negotiation. Danna’s storylines are fresh and immediately pique my interest as soon as I start the book. With #2 now read, I can assure readers that the NYPD Negotiators is a sharp new series that will engage your attention with complete captivation.

I was fortunate to receive an advanced reader’s copy of Shot Caller from the author and from NetGalley. The above is my honest review.