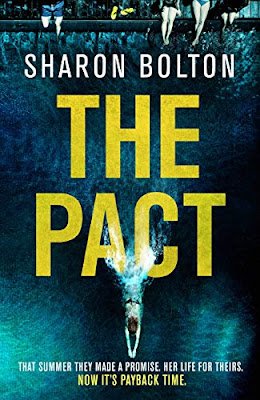 Sharon Bolton writes some of the best psychological thrillers in the crime/mystery genre. I have read all her books since the beginning, with Sacrifice being the first, followed by two more stand-alones, then her Lacey Flint series, and starting in 2015, back to stand-alones. This author has rarely missed the mark for me. This year, The Pact is out, and I was once more excited to read a Sharon Bolton book. I consider myself a slow reader, but I really did do that “one more chapter” progression, and I was finished in no time. I was on the edge of my seat most of the time while reading it, as Bolton keeps the suspense ratcheted up high and steady. It’s impossible to determine where the danger is coming from next. With the use of third person, readers get to feel the fear and anguish of the different characters as the spotlight is shined on each. However, there is a lingering unknown, an unreliability of narration, that leaves doubt as to what is really going on. I found myself leaning one way and then another as to who was the evil-doer or doers in this tale. Of course, that’s how a good thriller should work, keeping you on your toes and on the edge of that seat.

The premise of The Pact is not a new one, but Bolton’s take on it intrigued me. There are six high school friends who are involved in a tragic death, and they are bound to a pact as to how to handle it. The only truly accurate description of their solution is that they choose a cluster-fuck of a plan. These are six young lives on the cusp of bright futures. They are waiting for their A-level results from All Souls School, an elite school in Oxford, and the night before the results sees them gathered at Talitha’s grand home, trying to get through the night before they learn their fates. Megan is the only scholarship student; the others have grown up with lives of privilege. But, they are all part of the senior prefect team, and Megan is the head girl. Expectations are great, but no one is sure of their grades until the official reveal. Doing well guarantees their acceptance into a prestigious university and the path to a successful future.

With anxiety running high, the friends are looking for distractions. Megan, Talitha, Xav, Daniel, Amber, and Felix were already drinking, but that isn’t doing the job. Felix, whose looming physical presence seems to command attention suggests a dangerous game that everyone in the group but Daniel has had a turn at. It doesn’t take long until the group has loaded into Felix’s mother’s car, with Daniel at the wheel. The game consists of driving the wrong way down a major roadway from one junction to the next, about two miles. The only two who think this is a good idea that night are Felix and Xav. The driver Daniel is terrified, but the others all did it and remained unscathed, so it begins. This time does not end up back at Talitha’s house laughing and drinking more. When headlights appear coming toward the group’s car, Daniel panics and drives toward the lights instead of away. A last-minute grab of the wheel by Felix saves the cars from colliding, but tragedy isn’t avoided. The other car crashes, and all its occupants are killed.

The night that was supposed to be their last hurrah turns into a night of shattered souls. With ruined lives hanging over all their heads, Megan does the unbelievable. She offers to take the sole blame for what happened and to go to prison for it. But, she makes them all sign a paper that each of them will owe her a favor when she gets out, a favor they can’t refuse. Taking a photo with the group holding the paper ensures its authenticity, and she hides the proof before turning herself into the police.

The prison term is longer than anticipated, but Megan is out in twenty years, and she assures her “friends” that she still has the proof and expects her favors. From the way Megan resurfaces to the different five to the favors she finally asks will turn everyone’s successfully established lives upside down.

Bolton’s characters are always interesting and always well developed, and that continues in The Pact. However, the characters in this story are not very likeable. The five who let Megan take the blame all have moments where the reader will think they might be redeemable, but they quickly revert to their unsavory plotting. Megan is the character I most wanted to like, and she is the most likeable, but even she shows a cruel side in this double-dealing game of cat and mouse. Bolton cleverly engages the reader in the game of who can be trusted and who deserves sympathy, pitting her characters against one another and her readers following suit.

I enthusiastically recommend The Pact, but I would be remiss in my reviewing if I didn’t include that I was bothered by the ending a bit. It’s not that I disagreed with the ending, but I felt like it lacked a certain amount of plausibility due to the clues not clearly adding up. It was a dearth of development in the “why” and the “who” for me. However, it was an ending I could live with, and it doesn’t alter the fact that the book was a great read.